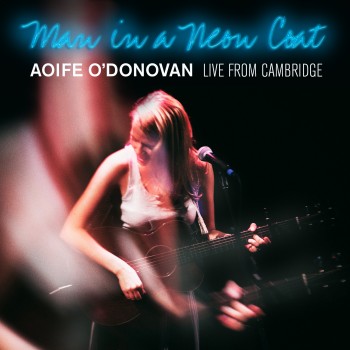 Aoife O’Donovan To Release Man In A Neon Coat: Live From Cambridge On Yep Roc Records

Critically lauded Aoife O’Donovan, who “has one of those beautiful, breathy, so-intimate-it’s-almost-anonymous voices,” (Washington Post) and who “recalls the Americana delicacy of Alison Krauss but with a far spookier and more fanciful feel,” (Lexington Herald Leader) will release Man in a Neon Coat: Live From Cambridge September 9, on Yep Roc Records. The album is now available for pre-order. A limited edition CD will be available October 1, via the Yep Roc Records web store or at an upcoming show.

Recorded live at The Sinclair in Cambridge, MA, on April 13, 2016, the album features live trio performances of tracks from her highly acclaimed albums, In The Magic Hour and Fossils, as well as covers of Joni Mitchell and Emmylou Harris classics.

“I’ve been unbelievably lucky to be touring In The Magic Hour with Anthony Da Costa and Steve Nistor,” notes Aoife. “They are two of the most talented musicians I’ve ever worked with, and recreating the songs from the studio sessions with such a stripped-down lineup was a super fun challenge. After a few months of touring, we decided that we needed to make a live album. The duet singing, the bass-free ensemble, the creativity of the drum sounds—it needed to be documented. We called in engineer extraordinaire Dave Sinko and he flew up to The Sinclair in Cambridge for a whirlwind night of music making to a packed house. We can’t wait to release these sounds into the world.”

Named as “a must-see act” at this year’s Newport Folk Festival by Rolling Stone, O’Donovan continues her relentless touring and will embark on a 16-city fall tour with Willie Watson on October 13. A full list of tour dates is below.

Since the release earlier this year of her sophomore album, In The Magic Hour, the conservatory-trained singer and songwriter has garnered accolades for the album written in the wake of her grandfather’s death and as an ode to her idyllic childhood summers surrounded by family.

Produced by Tucker Martine, the album includes special guest appearances by Chris Thile, Sara Watkins, Sarah Jarosz and Gabriel Kahane, among others, and is the follow-up to her highly regarded 2013 solo debut Fossils.