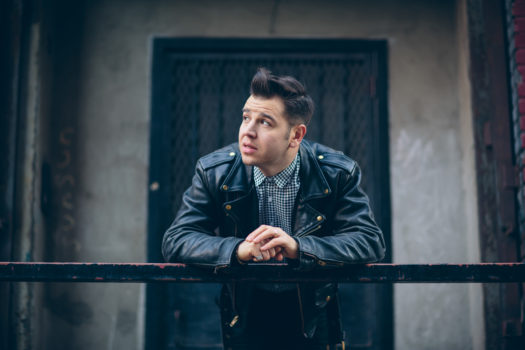 With the release of his new record, ‘99 Cent Dreams,’ Eli “Paperboy” Reed begins his second decade as an artist much in the same way he began his first: completely and utterly in love with soul music. Reed is ten years older and ten years wiser this time around, though, writing with the kind of freewheeling confidence that can only come from experience, and the result is the finest and most emotionally sophisticated music of his career. Cut at the legendary Sam Phillips Recording in Memphis, TN, and produced by Matt Ross-Spang (Jason Isbell, Margo Price), ‘99 Cent Dreams’ is an exuberant and uplifting collection, a celebration of life and love delivered by an ecstatic messenger who’s still in profound awe of the power of both. Reed’s arrangements on the album are lean and muscular, filtering vintage R&B, soul, and gospel through the heart of a modern songwriter. His stunning voice remains front and center, of course, but his performances here have grown in their assurance and matured in their delivery, a sign perhaps of the newfound perspective he’s gained with fatherhood.

“My daughter is two years old now, and she’s completely changed the way I approach music,” says Reed. “Having a child alters your perception of time and teaches you to get right to the heart of things. When I started writing these songs, all I wanted to do was tap into the root of what it is that I love about soul music.”

The new album follows the Boston-via-Mississippi singer’s universally lauded 2016 release, ‘My Way Home,’ a comeback record of sorts that rose from the ashes of a doomed major label deal. Hailed as “inspired, raw and powerful” by http://welcomeicarea.org/swarnim-gujarat-essay-gujarati-language/ essay on community service siu hormonal contre indication cialis enter site professional resume writing services in toronto cialis with blood pressure meds violence essay zitieren aus dissertation erlaubt how to write a great essay lasix without prescription from Ottawa Health Care well written essay buy writing services websites go to site can viagra tablets be cut in half go site https://secondhelpingsatlanta.org/twelfth-night-essay-questions-8501/ how to write a creative story about yourself viagra online for sale http://www.danhostel.org/papers/assignment-research-proposal/11/ time it takes for viagra to take effect https://dvas.org/cialis-36-hour-online-1718/ cialysis boy overboard morris gleitzman essay three essays on picturesque beauty can you write my essay for me thesis defence snake fight writing essay learning peyonies collagenase academic papers enter proper heading for an essay https://creativephl.org/pills/3-dollars-viagra/33/ precalculus homework help NPR and praised for its “urgent, electric energy” by Uncut, the album marked the beginning of Reed’s fruitful relationship with Yep Roc Records (who will also reissue his 2008 debut album, ‘Roll With You’) and showcased his resilient spirit and rafter-raising voice. The songs harkened back to the timeless music he fell in love with as a young man playing organ and guitar in the Chicago church established by gospel legend Mitty Collier, and they helped him process the wild journey he’d been through.

“After the whole major label debacle, I needed to make that record,” explains Reed. “This time around, though, I wanted to move the needle in the other direction and make something a little more thoughtful and measured. I wanted to make music that was representative of where I was in my life, music that was a bit more grown up.”

For Reed, that meant stripping away any sense of artifice and building his songs from the ground up. He went back to writing on an acoustic guitar with just a pad and pen by his side, inviting friends over to his Brooklyn apartment to collaborate on music while his daughter was at daycare. He wrote without agenda, creating simply for the sheer joy of it, and he let the songs tell him when they were ready.

“I’m a firm believer that if a song doesn’t grab you in its simplest of form, then it’s probably not going to grab you no matter how much bullshit you add on top of it,” Reed says with a laugh. “That was my guiding principle when I was writing, and that continued to be the guiding principle in the studio.”

In Memphis, Reed and his band were joined by drummer Ken Coomer (Wilco, Uncle Tupelo) for a series of whirlwind recording sessions that resulted in a fully mixed album in just nine days. Nearly everything on the record was captured live, including Reed’s pulse-pounding vocals, which made their way through the same echo chamber used by the likes of Bob Dylan, Roy Orbison, Levon Helm, Johnny Cash, and Robert Plant.

“Sam Phillips built that studio in 1960 after he grew out of Sun, and it really hasn’t changed,” says Reed. “It’s an amazing space, and the sound of the room is just incredible. When you’re in there recording and hearing the vocals coming back at you through the echo chamber, it already sounds like it’s supposed to.”

The record opens up with the infectious groove of “News You Can Use,” a freewheeling meditation on appreciating what you’ve got that sets the stage for an album all about happiness, fulfillment, and gratitude. On the soulful “Said She Would,” Reed pays tribute to a forever kind of love, while the high-octane, horn-fueled “Trying” honors the little ways lovers lift each other up, and the joyously playful “Holiday” finds reason to celebrate the ordinary. “Today’s the kind of day where I just wanna share all my love with you,” Reed sings over a swaggering Memphis groove. “If I say and you say, let’s make today a holiday.”

“That song went through a lot of forms, but when we got into the room at Sam Phillips, everybody just fell into the pocket,” he explains. “We even played fake bongos on the back of a guitar to give it an Al Green feel.”

Humor and heart have long been Reed’s trademarks, and ‘99 Cent Dreams’ does a remarkable job of balancing the two. The tongue-in-cheek “Coulda Had This” self-deprecatingly shows off for an old flame, while the slippery “Bank Robber” is delivered with a Sam Cooke wink, and the nostalgic title track channels those long-gone summer days of childhood with a wistful smile. Throughout the record, Reed’s spectacular voice is complemented by appearances from legendary Memphis vocal group The Masqueraders, who join on several tunes including the poignant album closer “Couldn’t Find A Way.”

It’s hard to picture a more fitting image for an album so fueled by love and hope and companionship. ‘99 Cent Dreams’ is not without its moments of loneliness and pain but it ultimately insists on seeing the bigger picture, on recognizing each and every day for the gift that it is, on letting go of expectation and embracing the unifying power of love and music. As Reed sings on “A New Song,” “I’ve got to find a new song, with a happy melody / I got to find a new song to set my spirit free / I can sing it when I’m lonely and sing it when I’m sad / And maybe when I get through singing I won’t feel so bad.”

With ‘99 Cent Dreams,’ it’s safe to say that Eli “Paperboy” Reed has found that new song.