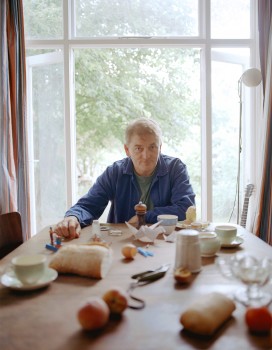 Everyone who has seen Nick Lowe, Van Morrison, Paul McCartney, or Mark Knopfler in recent years may not have known it, but they have enjoyed the musicianship of keyboard/accordian player Geraint Watkins.

Geraint has played his R&B/jump style piano and Creole-flavored accordian with some of the great names in popular music, both live and as a session player for nearly 30 years. His new solo collection, Dial W for Watkins, will be his stateside debut and will appear on his fellow band-mate Lowe’s label, Yep Roc Records. Despite a career that would make even the most road-weary rock veterans blush, Geraint is not content to rest on his laurels. Dial W for Watkins captures his finest solo recordings and plenty of collaborations with his mates, including Lowe on bass and harmony vocals. His ability to make the simplest musical statement into a sublime moment of entertainment still manages to baffle even his closest friends.

Geraint Meurig Vaughan Watkins was born in Abertridr, South Wales in February 1951. After serving time back in the early seventies at Portsmouth Art College, music beckoned and in the next few years, he was a member of noted British bands Juice on the Loose and Red Beans & Rice. Session work followed: recording and playing live with Dave Edmunds (on six albums) and on many others from Dr. Feelgood, Rory Gallagher, and John Wesley Harding to Tom Jones and John Martyn.

In addition to session work in the eighties, Geraint played accordian and keyboards with the somewhat infamous pub band, The Balham Alligators. The band was together 15 years and released 5 albums and also helped to keep the music of Louisiana alive in London’s pubs.

Geraint has been a big part of Nick Lowe’s recent solo work, contributing his soulful piano and organ to his trilogy of The Impossible Bird, Dig My Mood and The Convincer. He’s also been a part of Bill Wyman’s Rhythm Kings and Morrison’s studio and live band.

Around the time of Lowe’s release, The Convincer, Geraint released on the UK’s Bluefive Watkins Bold as Love. The new Dial W for Watkins is produced by the same team of Neil Brockbank and Bobby Irwin.

In addition to his upcoming Stateside tour with Lowe, he will also be appearing live with Morrison, while studio dates include sessions with Paul McCartney.