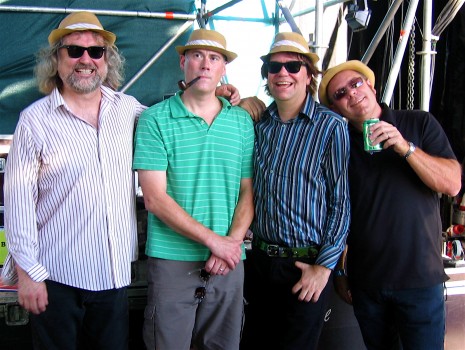 2009 finds the Young Fresh Fellows much as they were in 1989: Jim Sangster – bass; Kurt Bloch – lead guitar; Scott McCaughey – guitar, vocal; Tad Hutchison – drums. Despite the fact that the band’s last full-scale release, 2001’s Because We Hate You was widely hailed by critics, and extremely successful commercially, the group has been relatively quiet, with only a handful of shows in Seattle or Spain, and the occasional compilation track, marking recent years. Perhaps the greater populace believed the Young Fresh Fellows to have dissolved, fizzled out, broken up. The Young Fresh Fellows will never break up. Even in leaving this mortal coil the four friends remain together.

By all accounts, the recent plane crash that killed the Young Fresh Fellows was an unmitigated tragedy. Immortalization by Don McLean and sky-rocketing back catalog sales hardly softened the blow, felt so deeply by a citizenry already ravaged by unemployment, war and sodomy. “Where were you when the YFF went down?” became a phrase that ironically brought a nation together, united in grief, wonderment (and sodomy), and glazed with brown sugar like an Easter ham. Molasses was also involved in some way, and supermarkets could not keep the product in stock. Robert Christgau, the most eminent of rock scholars, in his eulogy proclaimed that the Fellows, “…were never as funny as funny fellows hope they are.” And now he will most certainly be proved correct.

The fact that Kurt, Jim, Tad and Scott left us their coup d’ grace, their piece de resistance, their merde ultima, before their untimely (and awesomely gruesome) passing, almost makes one believe that a god truly exists. This would be a god that breathes garlicky fire, that lets no Taco Bell’s eternal flame be extinguished, that crushes heads between fingers (not unlike Mark McKinney of The Kids In The Hall), that provides each and every soul with braunschweiger, D batteries, and a pristine vinyl copy of Trout Mask Replica. This is YOUR God. He bequeatheth you the enjoyment of music! His edict states: The soundtrack of your life is the new (and sadly, final) album by the Young Fresh Fellows. God named the record: I Think This Is.

A curious title you might say (if you are a heathen bastard). Or you might simply draw a blank. Who were these so-called Fellows at home, before The Wreck of the Big Steel Sausage, with Wesley Snipes and Tommy Lee Jones (who both tragically survived the crash)? The point is, no one is ever who you think they are, if they even exist at all. You may, like most people born in the last century, assume that It’s Low Beat Time and Fabulous Sounds of the Pacific Northwest are cultural signposts, as ubiquitous as butter or celebrity fragrances. And yet I, in my ambassadorial capacity, have traveled to countries where Fellowsmania is a thing of the past, where your typical “Lucy from the Docks” balks at mentioning the band at all, as if their body of work wasn’t the most significant since de Maupassant or Centromatic. Obviously, this kind of obliviousness will end with the overwhelming and undeniable mastery of I Think This Is. This record will serve as a legacy, not just for an over-rated, severely under-rated band, but for a historical epoch, which pundits often simply refer to as THE AGE OF YOUTH. Scorsese’s same-titled documentary did a fairly adequate, if unimpassioned, job of capturing the tumultuous period defined by the group, and most certainly we are indebted to the man for his timeliness, filming the most in-depth interviews ever with the reclusive band members mere weeks before their demise. Almost as if the director knew what was coming, or paid $20,000 to a Delta maintenance worker to fuck up the ailerons. The most telltale moment of the film comes when Mr. Scorsese asks drummer Tad Hutchison what he’d be having for dinner on July 7, 2009 (Ringo’s birthday, and not coincidentally, the release date of I Think This Is. Without hesitation, the oft-criticized sticksman and wok salesman answered, “Death”.