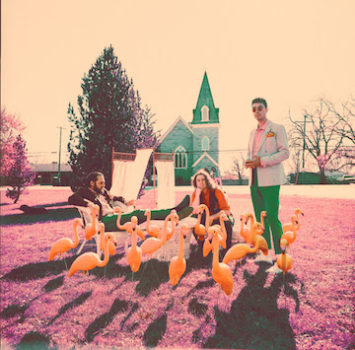 “Born Ruffians make music with such conviction that it’s…hard not to sing along.” –Pitchfork

“…their] shiftiness and intensity place the group squarely in a post-punk lineage that traces back to rock rantings of the ‘70s and ‘80s.” –NPR Music

Touring in support of their fifth studio album, Uncle, Duke & The Chief, critically acclaimed Toronto- based Born Ruffians will embark on a 14-city U.S. tour, which kicks off November 28 in Athens, GA. A full list of dates is below.

Directed by Leah Fay Goldstein and Peter Dreimanis (July Talk), the band created a video trilogy starring frontman Luke Lalonde for the tracks “Love Too Soon,” “Forget Me,” and “Miss You.”

Formed in rural Ontario, Born Ruffians arrived on the Toronto scene in 2004, and released a self-titled EP in 2006 on XL/Warp Records, who went onto release the band’s debut full-length album, Red, Yellow & Blue and Say It (2010). Birthmarks (2013) and RUFF (2015) followed on Yep Roc Records and has received critical praise from NPR, Pitchfork, Stereogum, Noisey, Magnet, Under The Radar, and more.

Since the album’s release in February, Born Ruffians have had a career-high number of sell-out shows in the U.S. in cities like New York, Los Angeles, Seattle, Nashville, among others. The band has toured with The New Pornographers, Caribou, Tokyo Police Club, Franz Ferdinand, Peter Bjorn and John, Hot Chip, The Hidden Cameras, Girl Talk, Stereolab, Tame Impala and others.