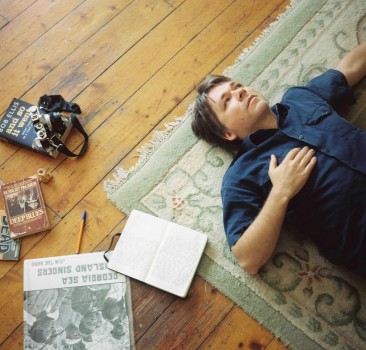 Set for a March 24, 2015 release on Yep Roc Records, Where Did You Come From? is now available for pre-order with an instant download of the first single, “When You Go.”

Prior to his time in the American South, Hanlon spent a month in the Australian desert mining town of Broken Hill – famous as the filming location of Mad Max 2. Sowing the seeds of the new songs, he sent demos to U.S. studios he liked the sound of and in which he wanted to record.

“For lack of any real purpose I went on an exploratory adventure of the American southern states and the whole thing grew up around me like rogue lantana,” says Hanlon. “I spent about 20 nights sleeping on different Amtrak trains with my jumper rolled up under my head for a pillow.”

The album was recorded in one-off sessions in Memphis, Muscle Shoals, New Orleans, Clarksdale, and Nashville, where the first tracks were cut with Andrija Tokic (Alabama Shakes) at Bomb Shelter Studios. From meeting and working with a revolving cast of artists and musicians, the accidental nature of the recording process fed into the songwriting and shape of the album. “I got a real sense of a scene that was developing across many cities of the South, connected by friendships and a mutual appreciation of traditional roots music.”

Some of the musicians who joined Hanlon in studio had played on hit songs he’s known since childhood. David Hood (Muscle Shoals Sound Studio) and Spooner Oldham (Wilson Pickett, Aretha Franklin) sat in on a song at the legendary Fame Studios in Muscle Shoals, and Howard Grimes, the 72-year-old longtime drummer for Al Green, backed him on the Memphis session.

“When I hopped off [the train] I walked around the cities and met buskers, tap-dancers, preachers, drunks and drug dealers, all of whom had something worth learning about,” Hanlon tells. “I started having compulsive notions that whoever I met should somehow contribute to the album. Like fate. One guy tried to break into a car I was sitting in and even he ended up playing bass on a song.”

With four studio albums, a rarities album and an EP, Hanlon has built a loyal Australian fan base. Known for his engaging live performances, Hanlon has toured with Billy Bragg, Violent Femmes, The Magnetic Fields, David Dondero, and Jeffrey Lewis. Prior to becoming a solo artist in 1999, Hanlon was a member of the Simpletons, and played with The Lucksmiths, The Dearhunters, and Mick Thomas.

Tags: Darren Hanlon, Where Did You Come From?