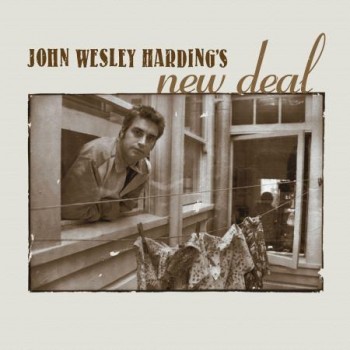 John Wesley Harding’s New Deal, originally released by Rhino in 1996, and here released for the first time on vinyl, was the songwriter’s first album away from Sire, after the early 90’s trilogy of Here Comes The Groom, The Name Above The Title and Why We Fight. Left to his own devices, on his own dime, determined (for the first time) to make precisely the record he wanted, Harding produced an unexpectedly introspective album that instantly became a fan favorite, and coincided with a sharp turn towards the acoustic in his career, inspired less by Elvis Costello, Nick Lowe, and The Lovin’ Spoonful, and more by the more baroque folk stylings of Cat Stevens, Duncan Browne and early Bee Gees.

The title, which seemed to refer to the end of his association with Sire, also signaled a change of intent. The Sire records were partly successful because of their almost absurd stylistic variety, but on New Deal, Harding seemed for the first time to find his authentic musical voice on a record that worked precisely because of its cohesion of expression. The record was made at Chris von Sneidern’s Ordophon-upon-Avon studio in San Francisco in almost ludicrously laid-back conditions, one or two days a week for many months. Parts weren’t recorded until particular friends happened to pass through town. At the mastering session, the engineer asked what the almost inaudible squeak was on some of the tracks: “Well, probably the mattress,” said the singer. “I did most of the vocals sitting on a bed.” The focus here is the songs themselves, with their simple, rich, emotionally direct arrangements. It was the first time a John Wesley Harding production married form and content; each song seemed to have the perfect setting; no instrument was unnecessary. Drums were used on only two songs, and only at the end of one of those. It was as though Harding, with the shrewd guidance of von Sneidern, was learning how to make a record as he recorded this one.

Though Harding didn’t want to bloat the vinyl, or alter the presentation of the original record, with unnecessary associated material, this version comes with a digital download of 15 bonus tracks, including every extant acoustic demo of the songs on the album, numbering ten, all previously unreleased, recorded 6/7/94 for a tape called “The Sayonara Sessions”. Also included are all five bonus tracks from the Other People’s Failure CD5, including two out-takes (“Let Us Now” and “Death Of The Ghostwriter”), live versions of “Kiss Me, Miss Liberty” and “The Secret Angel,” and the classic, prophetic “When The Beatles Hit America,” in its finest incarnation, recorded live for KSCA, LA.

John Wesley Harding’s New Deal is regarded, among his fans, as his finest record, and it will never sound better than on this, its first release on vinyl, on two 33rpm records for the perfect listening experience.

Click below to check out the John Wesley Harding’s New Deal bundles available exclusively at the Yep Roc Store and save 15% on your order!

Click the player below watch a 7-song playlist from a special live performances by John Wesley Harding including the songs “Kiss Me, Miss Liberty” and “Still Photo” from New Deal.

Tags: John Wesley Harding, New Deal, The Sound of His Own Voice, Video