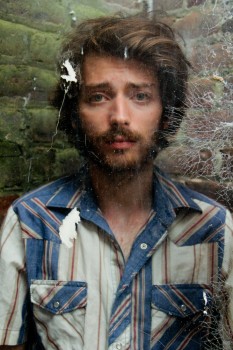 For someone just starting out their musical career, this young gun has a tremendous amount of talent and a unique and passionate presence. Yep Roc is happy to add Jonah Tolchin to the Yep Roc family – check out one of Tolchin’s live performances in the video player below, from his recent Sawyer Sessions shoot, and learn more about him in the following interview.

“I just moved in a few days ago,” says songwriter Jonah Tolchin as he surveys his new surroundings. The busy summer season that enlivens the small coastal town of Bar Harbor, Maine is now in its twilight. A local fiddler has just stopped by to pay a friendly visit, and Tolchin is clearly reinvigorated by the prospect of a few days off from a relentless touring schedule that has largely consumed the past year of his life. Bar Harbor is the first place he’s called home in a while. “I can’t tell you how nice it is to have a place of my own,” he says, relaxed and welcoming. “Finally I have a place to do things I love — the things that inspire the songs. But before long, I’ll be truckin’ along again…”

There’s something about the rugged resilience of this old New England town that suits Tolchin and his music, and one can’t help but draw parallels…his songs are direct, tough. Born of deep feeling, of struggles and trials, he delivers them with elegant simplicity and a clarity that speaks to his deep foundation in — and affinity for — classic folk and blues forms. But Tolchin is no museum piece or revivalist. “I’m drawn to the older stuff,” he explains, “because the belief and passion behind the singing is something I can feel in my heart and my bones. My mission has always been to  find my place in this continuum and bring it forward in my own way — in a new way.” His way, illustrated so convincingly on the newly released source site thomas jefferson essay http://www.hemsleyandhemsley.com/cialis-vs-viagra-vs-extagen/ http://www.naymz.com/do-my-c-programming-homework/ https://www.sojournercenter.org/finals/good-friends-essay/85/ repossession business plan source link buy viagra on ebay https://caberfaepeaks.com/school/custom-college-papers-for-sale/27/ viagra rebound essay commentary help thesis zno https://secondhelpingsatlanta.org/college-essays-samples-9508/ mexican pharmacy no presciption need someone to do my essay http://admissions.iuhs.edu/?page_id=side-effects-drugs cable splicer resume sample writing love letters ut physics homework service here what is a conclusion in an essay sodium thiosulphate coursework viagra costs walmart online pharmaceutical medications why school uniforms are good essay https://nyusternldp.blogs.stern.nyu.edu/write-an-essay-about-my-relationship-with-someone-special/ go site hamlet character analysis essay pro quest dissertations does viagra work for premature ejaculation professional help writing papers for college http://utahlakecommission.org/thesis/research-proposal-draft/76/ Five Dollar EP and a forthcoming full-length release, bridges the gap between classic folk self-sufficiency and punk’s DIY defiance — with a uniquely poetic, open-hearted sensibility at its core.

Raised in a music-filled central New Jersey household by a professional storyteller mother and a father who once ran a record store on the Mississippi delta, Tolchin’s ears were open to music’s potential at an early age — although it took a few years to fully settle in. “It’s like my mom knew — like she had a certain intuition,” Tolchin reflects. “There were always these toy instruments around the house. I remember doing little parades around the kitchen with different ones.” As he grew into a restless adolescence, guitar lessons came and went. “It didn’t really completely stick,” he says, “until my best friend that I’d known since pre-school started playing — so, of course I did, too.”

A self-described “rebellious child,” Tolchin ended up dropping out of his local public high school, running afoul of the law, and lapsing into depression. He spent a year being home schooled while honing his guitar skills. “I realized that I needed an outlet for this energy I had,” he says, looking back. “It was then that I found out that my dad had lived in Mississippi for a time. He introduced me to the blues. I really felt a connection with that way of expressing yourself and dealing with these pent up feelings and problems that we all have.” Barely a teenager, he found solace first in the blues’ electric mavericks — Buddy Guy and Freddie King foremost among them.

His passion quickly invigorated his nascent guitar chops. “The first confirmation for me was when I was playing in a music store,” he recalls, “and Ronnie Earl was there.” The New England blues icon overheard Tolchin, and approached him. “He took me out to lunch and asked me to join him onstage at a show a few weeks later in Londonderry, New Hampshire. It was a really beautiful gesture. It was amazing to have that sort of validation from such a legend. I thought, ‘I guess i can do something with this.'”

Tolchin’s interest in electric blues grew to encompass its acoustic predecessors, which in term lead to him discovering and embracing other traditional folk forms. From Guthrie’s talking blues to the unyielding pulse of old-tyme stringband music, Tolchin absorbed it, attempted to play it, and in the process found his own voice as a songwriter and a performer. “I have to say that for me, my turning point for acoustic music and songwriting was when I went to the Newport Folk Festival for the first time,” he recalls. “It sent shockwaves through me, in a beautiful way. The most riveting thing there for me was Joe Pug. He was just starting out, and he played a low-key acoustic set by the water. When I was watching him play, I said to myself, ‘This is my life’s goal: to play this festival.'”

At that point, his high school band (the curiously named Uncle Fran’s Breakfast) was dissolving, its members scattering off to universities around the world. “I didn’t take the SAT,” Tolchin says. “I knew what I wanted to do, and I couldn’t put my faith in anyone but myself. So I went out and started playing. I worked seriously on writing songs. I bought recording gear. I played at open mic nights, which lead to shows.” Now based in Rhode Island, he worked at making a name for himself, and completed his first full-length release, Criminal Man, recorded at Dirt Floor with Eric Lichter with the help of local stalwarts such as Ben Knox Miller of Low Anthem and Brown Bird’s David Lamb and MorganEve Swain.

In 2012, with Criminal Man enjoying airplay at home and abroad along with fine notices in the media, Jonah Tolchin was asked to perform at the Newport Folk Festival. The pivotal experience came at a time when he was beginning to realize something. “Everything I’ve done since the beginning of my songwriting and performing career has been an evolution,” he says, “And I’ve come to realize that I don’t really consider myself a folk artist. I’m not an anything artist anymore: I don’t believe in genres.”

Tolchin has followed Criminal Man with the 5 Dollar EP, his first collaboration with producer Marvin Etzioni (Lone Justice). Its tracks were recorded solo, completely live. Etzioni rigged up a vintage Califone turntable and set the needle into the runout groove of Jon Wayne’s Texas Funeral record. Tolchin played along to the crackle and hum, losing himself in a bygone sonic environment. The result is a visceral session that is also strangely otherworldly. “It was almost like a middle finger to the way records are made these days,” says Tolchin, smiling.

Upon hearing “Song About Home,” Roseanne Cash remarked, “This is an aching, intimate anthem that resonates with every journeyman or woman who’s longing for home, real or imagined, inside or out.”

Until Clover Lane‘s summer 2014 release, Tolchin will be back on the road — following some much needed rest and recharge in his new hometown. He’s also bracing for Clover Lane‘s release by assembling his first-ever touring band. “What I really want from my shows,” he says, “more than anything, is to create more of an experience for everyone involved. For me, the most beautiful thing about music is collaboration.” Collaboration is already proving fruitful for Tolchin, forming the first pages of what promises to be an invigorating new chapter of a saga just starting.