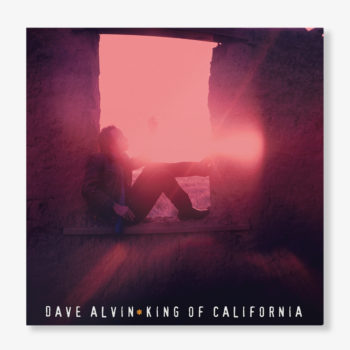 Originally released on Hightone Records, and being reissued by Craft Recordings, The remastered, expanded edition includes a previously unreleased instrumental studio track, “Riverbed Rag,” along with bonus material.  And King of California is available on vinyl for the first time EVER!

Recorded in Los Angeles the day after the historic 1994 Northridge earthquake and produced by Greg Leisz, King of California had its genesis in the album’s title track, a readymade folk ballad, written for his mother, in which an aspiring suitor heads west to make his fortune in the wild, still-young Golden State. “King of California is when I decided ‘this is when I let the song tell me what it sounds like,’” says Alvin. “Ever since then, that’s been my rule. It sounds ridiculous, but it was something I had to learn.”

Featuring acoustic interpretations of some of the finest songs in his catalog, along with new, folk-inflected compositions, and notable covers, Dave Alvin found the true measure of his own voice with King of California. “It was ironic that for a guy who was known as a loud guitar player and questionable singer, his best seller was an acoustic album,” says Alvin.

Included are songs written and originally recorded during the ’80s: “Barn Burning” from  American Music (1980) the debut album from The Blasters, “Bus Station” and “Leaving” from the Blasters’ Non Fiction (1983), “Little Honey,” written with X’s John Doe and featured on the Blasters’ Hard Line (1985), and “Fourth of July,” which appeared on both X’s See How We Are (1997) and on Alvin’s solo album Romeo’s Escape (1987). “Every Night About This Time” also appeared on the latter album.

Like the records Alvin made as a member of the Blasters, King of California features a variety of covers, including Tom Russell’s’“Blue Wing,” Dallas singer-pianist Whistlin’ Alex Moore’s “West Texas Blues” (retitled “East Texas Blues”), Memphis Slim’s classic “Mother Earth,” and “What Am I Worth,” a George Jones song, featured here as a duet with the incomparable Syd Straw. The album also includes co-writes with Rosie Flores (“Goodbye Again”)

The expanded edition includes a previously unreleased track from the recording sessions, “Riverbed Rag,” an instrumental designed for a guitar-dobro duel by Alvin and Leisz, and inspired by the usually dry San Gabriel River that both musicians grew up exploring. Two additional covers, Merle Haggard’s “Kern River,” originally recorded for the 1994 Haggard tribute album Tulare Dust (co-produced by Alvin and Tom Russell), and Katy Moffatt’s “The Cuckoo,” from her 1999 Alvin-produced album Loose Diamond, round out the bonus tracks.

“I’m real proud of [King of California] twenty-five years later,” Alvin says. “The whole process was a revelation, to record with everybody in the studio sitting roughly in a circle. Sitting there on the edge of my chair with an acoustic guitar knowing that if I blow this chord we have to start over. And I could use my voice; when I was recording electric my voice couldn’t lead the band. In this situation I could. That allowed a certain openness and freedom I hadn’t experienced before. And for Greg, this was his baby, his chance to produce me and get my voice right. His calmness in all of this led to the vibe of the record.”