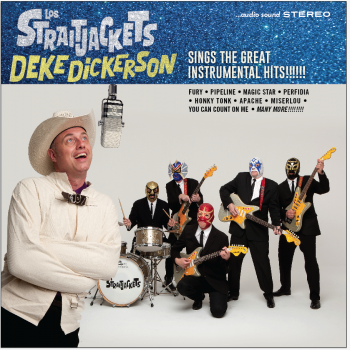 “America’s #1 Instrumental combo (Los Straitjackets) and I decided that 6 knuckleheads were better than one and that joining forces for an album’s worth of vocal instrumentals was yet another mountain that needed be to climbed,” says Deke Dickerson. “The results you now hold in your hands. It is the first album of its kind, and it is required to be in your collection.”

When it comes to delivering high-energy rock and roll instrumental music, no one equals the finesse, power and perseverance of Grammy-nominated Los Straitjackets. It’s been 20 years since the Nashville-bred band first dressed in their easily recognizable attire of Lucha Libre masks. Since then the group has toured around the world, released 11 studio albums,  finding to time to record and tour with El Vez, Dave Alvin, The Reverend Horton Heat, Tom Petty and The Heartbreakers and Big Sandy– to name just a few.

Deke Dickerson has kept the flame alive for real rock & roll, since he was the frontman for Missouri’s legendary Untamed Youth. Since then every project (including his The Dave and Deke Combo, The Go Nuts, Blind Rage and Violence) Deke pursues has brought his unparalleled musicianship and flair for entertainment to the forefront. He has collaborated with many of his heroes including Duane Eddy, Larry Collins of The Collins Kids,  Randy Fuller (of the Bobby Fuller Four) and The Trashmen. His work as bandleader at the Ponderosa Stomp and ringmaster of the Guitar Geek festivals, and as an author have helped keep the spotlight shown on the first generations of rock & rollers.