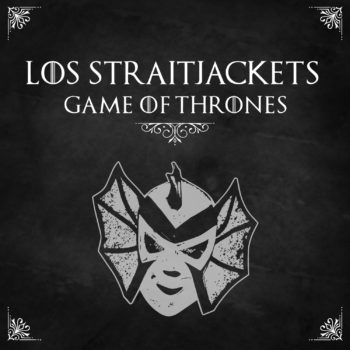 The masked instrumental surf group Los Straitjackets, widely recognized for their outrageous album concepts, have been given the highest of honors: their cover of the theme song to Game of Thrones will be featured as the main title theme on the show’s final season.

Listen to the show’s theme song performed by Los Straitjackets below.

Eddie Angel of Los Straitjackets says the call from HBO was a total surprise. “When we learned that George Martin wanted to talk to us, we were ecstatic. I mean, the guy who produced The Beatles wants us to be part of his TV show?”

Angel added, “Of course, we were disappointed that it was actually some guy named George R.R. Martin, who likes to write about dragons, dwarves and weddings. But the opportunity to be part of such a pop culture phenomenon was one we couldn’t resist. And the money wasn’t too shabby, either.”

Whitney Walker, creator/host of the fan-favorite Hold The Door: The Game Of Thrones Podcast,  thinks that the Los Straitjackets collaboration is a perfect way to change the formula heading into show’s final season. “I’ve never seen a shooting star,” Walker explains, “But when I hear Los Straitjackets’ surf-rock take on the Game of Thrones theme song, it’s one of those circumstances where you know you’re witnessing a moment. A moment where the universe comes to a complete stop and makes perfect sense. Where the sun and the moon overlap and the shadows of the earth all cross into one perfectly-vectored image. And the image is that of a Mexican wrestling mask.”

As Walker explained on Hold The Door Podcast, there’s speculation that show executives are considering retroactively changing the theme song for all seven previous seasons of Game of Thrones to Los Straitjackets’ cover version. If that’s the case, per Tonio, we can expect to see these changes executed in the few weeks ahead of the Season 8 premiere.

Season 8 of Game of Thrones isn’t the only exciting release on the horizon. Los Straitjackets’ forthcoming EP Channel Surfing, is set to arrive on June 21, 2019. In addition to the Game of Thrones theme song, the band employs their signature surf rock sounds to some of television’s greatest theme songs, including The Andy Griffith Show, Ken Burn’s The Civil War, and a medley of Dancing With The Stars and Sex And The City. It is not known whether or not these classics will also choose to replace their theme songs with these nuggets of perfection, but one can dream. Channel Surfing is available for pre-order now.

The eighth and final season of Game of Thrones premieres on HBO on April 14.