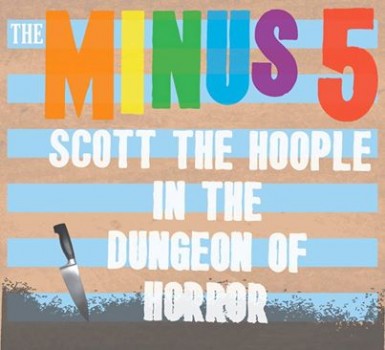 The Minus 5 Record Store Day Preview: Scott The Hoople In The Dungeon of Horror

The Minus 5 is giving devoted fans a very special treat this Record Store Day. On April 19, the band will release its latest album, a box set – Scott The Hoople In The Dungeon of Horror – consisting of five LPs of brand new material. Recorded primarily in the basement of M5 surgeon general Scott McCaughey, the songs are the product of sporadic spare moments of inspiration over the last two years. The subterranean studio,  aka The Dungeon of Horror, is a concrete cubicle walled off by shelves full of LPs, so it is only natural that this collection of songs will be released strictly on vinyl.

One hundred of the 750-edition album set are pressed on colored vinyl that corresponds with the complex color-coded system of credits detailing the musical contributions of the many talented contributors to the project and will be released on Record Store Day. To celebrate, the band rolled out one song from each of the five LPs, in the YouTube playlist below, including: