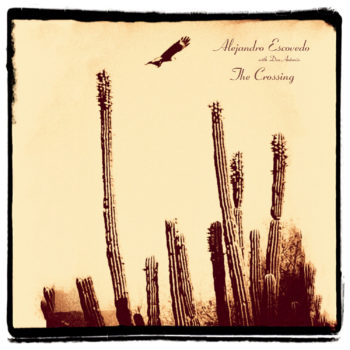 On his scorching, cinematic new concept album ‘The Crossing’ (Sept 14 / Yep Roc), Alejandro Escovedo tells the story of two young immigrants – Salvo from Italy, and Diego from Mexico – working in a Texas restaurant in pursuit of the American dream. Mirroring Escovedo’s own experience as the child of Mexican immigrants, and drawing inspiration from his relationship with Italian co-writer Antonio Gramentieri, their journey navigates cultural identity, ancestral weight, minority rights and racism as they realize they have arrived in a different America – one that’s not as open and free as they believed it would be.

Listen to the first track “Sonica USA” HERE via NPR. Featuring Wayne Kramer of MC5 on guitar, the scorcher serves as an ode to the 70s punk scene where Escovedo found solace as a Mexican-American growing up in Austin, and the solidarity he found in his brother’s own pioneering punk band the Zeros.

Says Escovedo: “Early on I’d play in San Marcos, San Antonio and get all these Chicano kids in denim vests and Iron Maiden patches. I remember thinking they were into us, not necessarily for the music, but for the fact that we were on stage. They loved that we were doing what we were doing.”

Escovedo crossed borders of his own for ‘The Crossing’ sessions, recording outside the US for the first time ever at a farmhouse in Villafranca, Northern Italy with the help of co-producer Brian Deck (Modest Mouse, Gomez, Iron & Wine). Italian all-instrumental group Don Antonio – helmed by co-writer Antonio Gramentiere – bring the record’s narrative to life with their sweeping arrangements, while cameos from Kramer and The Stooges’ James Williamson serve as reminders that Escovedo’s punk ethos burns bright (both bands name are checked in the lyrics as well). Elsewhere on the record, alt-country pioneer Joe Ely features on both the title track and his self-penned “Silver City”, while Peter Perrett and John Perry from UK legends The Only Ones reunite for their first recording in almost 40 years on “Waiting For Me.”

Alejandro Escovedo will kick off an international tour later this summer, with Don Antonio joining him on the road as backing band. See full routing below, more dates to be announced soon.

‘The Crossing’ is available for pre-order here: http://yeproc.11spot.com/alejandro-escovedo-the-crossing-bundle.html