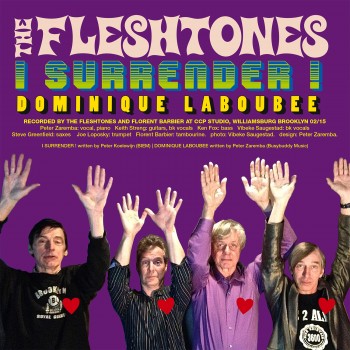 Now Available for Pre-Order: The Fleshtones’ I Surrender!

Let’s consider this a preview, or perhaps a warning of what the Fleshtones have in store for fans ­and foes, alike. And it’s just like The Fleshtones to revive the concept of the ‘Double A­-side 45’ (or is it double B-­side?). We’ll let you decide. The Fleshtones reach back to their horn- section-­driven sound of the ’80s for their version of Bonnie St. Claire & The Gloria Unit’s monumental ‘I Surrender’. ‘Dominique Laboubee’ is dedicated to the late lead singer of the seminal French rock & roll band The Dogs. Dominique’s elegance ­and passion for rock & roll shall be missed forever. WE do not sing in French, just as Dominique would have wanted it to be. The Dogs lead guitarist Tony Truant joins us with some ‘leads’ and his distinctive vocal style.

There will be more because that’s The Fleshtones ­ever evolving to paradoxically remain the same. The Fleshtones have stayed remarkably true to their roots. ­All of them. Taking part in the punk rock revolution of the mid ­70’s at CBGB and Max’s Kansas City, proving that you could be revolutionary and still love to do The Jerk. If not forever young ­then forever juvenile, because as Iggy Pop demands to know about any music, “Is It Juvenile?” It is. and much more.

The Fleshtones have a new 7″ record coming out July 24th 2015! Pre-order the new record, I Surrender! now at the Yep Roc store and be sure to catch the band touring in Europe! Tour dates below: