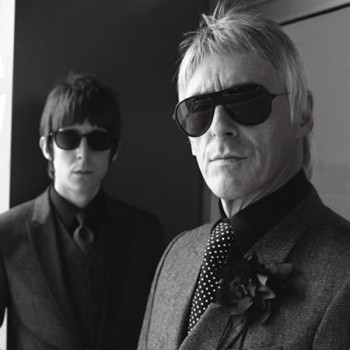 The latest ad campaign for John Varvatos brings together music legend Paul Weller, known as the “The Modfather,” and heir apparent Miles Kane. The images were shot in Manhattan by Danny Clinch, against the distinctly blue-collar backdrop of a Lower East Side pawn shop, where the two sharply dressed subjects stand out against the gritty downtown setting. The iconic photographic style, historically used to capture everyone from Bob Dylan to the Clash, vividly conjures the 1960s music scene.

Paul Weller has had a long and diverse trajectory, from his days with the English punk band The Jam to The Style Council to a successful solo career.  Weller’s latest album: Sonik Kicks has been one of the most critically acclaimed albums of his entire career.  Miles Kane is a dapper and intrepid 26-year-old rock ‘n’ roller whose acclaimed 2011 solo LP, Colour of the Trap, was one of the UK’s biggest-selling debuts. He loved “the swagger” he got from John Varvatos’ clothes.

According to Stephen Niedzweicki, creative director of Yard and longtime Varvatos collaborator, “The images we shot were inspired by some of the early post-Mod portraits of Paul, as well as classic portraits from the British music scene of that time. By bringing together a veteran musician with another who’s just getting started, we were able to look both forward and back and introduce a whole new dynamic.”

The shoot also included video, the direction of which was inspired by the music-driven films of that same era, like the Beatles’ 1964 “A Hard Day’s Night.”  The soundtrack is Paul Weller’s “That Dangerous Age” from Sonik Kicks

“These images show a kind of passing of the musical torch,” says designer John Varvatos, “and you can see the influence that Paul–a fashion and musical icon–has had on Miles Kane, an up-&-comer to be reckoned with. These two Mod men dressed to the nines provide such a spectacular contrast to their surroundings. ”

Photographer Danny Clinch notes that these photos are, “once again inspired by classic documentary music photography from the 60s and 70s.” Clinch is an integral part of a team that works to create an atmosphere guaranteed to bring out the best in both the clothes and the superstars wearing them.