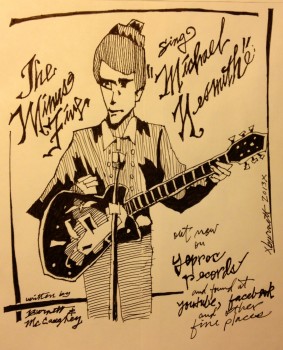 The Minus 5 record a 9-minute tribute to Michael Nesmith.

Took up a guitar in big Texan hands

Rode into town for the picture show

Heard about a gig on the radio…

So begins The Minus 5’s 9-minute tribute to Michael Nesmith, and our first taste of the “forever forthcoming Minus 5 album,” according to band member Scott McCaughey:

My pal Bucks Burnett wrote an epic poem called “Michael Nesmith”.  I didn’t really understand it but I like things that I don’t understand – so I made it a lot longer and put in a lot of my own mystical feelings about the man.  Then I strummed it and sang it – that was the easy part.  I’ve loved Nez since the Monkees days, and have been a big fan of his solo work.  I am thrilled that he is embarking on a rare U.S. solo tour starting now (March 21, 2013), and thought it’d be cool to pay tribute by putting this song up into the ether.  Don’t be afraid.  It’s a small taste of the forever forthcoming Minus 5 album.  Go see Michael Nesmith if he comes to your town!  I know I will.

Don’t miss the lyric video in the media player below, featuring the iconic green wool cap.

Tags: Michael Nesmith, Scott McCaughey, The Minus 5, The Monkees