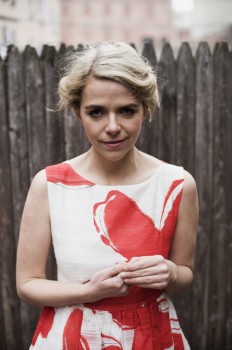 Just in time for the July Fourth holiday, Elle Magazine premiere the official music video for Aoife O’Donovan’s single “Red & White & Blue & Gold.” Filmed in Malibu, Calif., the video picks up on some of the imagery in O’Donovan’s lyrics. Watch the video now via Elle.com and in the  player below.

Aoife O’Donovan has made her reputation as a highly versatile musician: The 30-year-old has been a member of Boston-based bluegrass outfit Crooked Still and female folk trio Sometymes Why; she also has collaborated with artists as diverse as the Punch Brothers and renowned cellist Yo-Yo Ma. And with the release of her debut full-length solo album, Fossils, which hit shelves last month, the multi-instrumentalist is poised to make a name all her own.

Fossils is highlighted by the breezy charm of lead single “Red & White & Blue & Gold,” which we might add is a perfect addition to any Fourth of July playlist. Now, to get you in the mood for the good-times holiday, check out the music video for O’Donovan’s buoyant song—in which the singer soaks in some beach-side beauty—exclusively on ELLE.com.