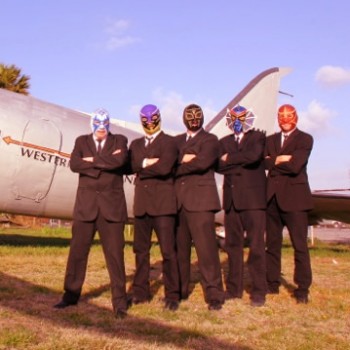 Here’s the exclusive premiere of “Space Mosquito,” a brand-new track by Los Straitjackets, aka “America’s instrumentalists.” “Space Mosquito” is from the band’s new guitar-driven album, Jet Set, which will be released August 7.

Jet Set was produced by the band’s longtime friend, Janne Haavisto, the former drummer of Finland’s Laika & The Cosmonauts. Haavisto put melody at the forefront of this collection of 14 new tracks, and those melodies are backed by an amalgam of sweeping percussion, lush horn arrangements and distorted strings.

“I think it’s remarkable that this far into our career, we could do something that I’d consider our best work,” said Los Straitjackets guitarist Eddie Angel (who also happens to be a former GuitarWorld.com blogger).

It’s been 18 years since Nashville-bred Los Straitjackets first donned their lucha libre masks. Since then, they’ve toured the universe and elsewhere, released 11 studio albums and two live albums. Guitarist Daddy-O Grande (Danny Amis) was diagnosed with multiple myeloma in 2010. After he underwent a successful stem cell transplant in 2011, the band played a benefit show for Amis in Los Angeles that featured guest appearances by Conan O’Brien, Johnny Rivers and more. You can check out photos from that show HERE.

The good news is Amis’ guitar can be heard all over Jet Set!