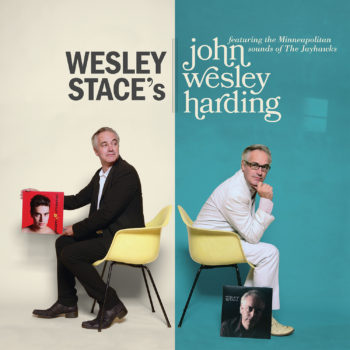 Acclaimed singer/songwriter Wesley Stace will release Wesley Stace’s John Wesley Harding on February 24, 2017 via Yep Roc Records. Recorded with The Jayhawks—Gary Louris, Marc Perlman, Tim O’Reagan, and Karen Grotberg—at Flowers Studio in Minneapolis, the album was co-produced by Stace and Gary Louris.
Listen/share the first track “Let’s Evaporate,” written with Chas Cronk from the Strawbs, one of Stace’s favorite bands. The album is now available for pre-order here.
The album features 12 tracks chosen for these sessions by Stace, who says, “I always have a lot of songs, so I listened to every unused song I had, many of them quite recent, and picked 11 that I thought The Jayhawks (or The Wezhawks, as we started to call it) would sound great on. I also included a cover, “Don’t Turn Me Loose,” which is where the idea of our making a record together had originated: I saw them live and thought they’d sound great playing that song, and then I thought: and I should be singing it! And they liked the idea. And we did these twelve songs, and that’s it. Everything we recorded is on the record. No outtakes.”
The second album under his real name, the album’s title was chosen for a myriad of reasons including a) the urge to bring all of his art under one banner, b) Jeff Lynne’s ELO, and c) various cab ride conversations.
Wesley Stace’s John Wesley Harding Tracklisting:
Tags: Wesley Stace