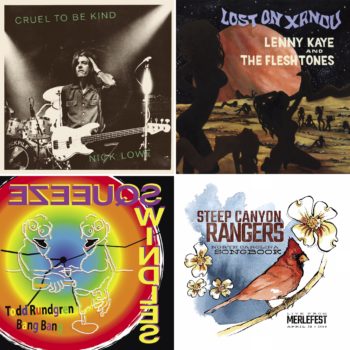 First released as a single in 1979, Nick Lowe’s hook-laden chorus and signature turn of phrase “Cruel To Be Kind” has been a radio staple ever since. To celebrate the 40th anniversary of the power pop gem, Yep Roc Records is releasing a limited edition 45 single with the A-side featuring the classic single with a B-side of the previously unreleased collaboration of Nick Lowe & Wilco performing the track together in 2012. The 45 single arrives on green vinyl and contains a digital download for both songs.

“Bang Bang” has remained a curious single in the Squeeze discography, as it was nearly disowned by its songwriters Glenn Tilbrook and Chris Difford. Even more curious, however, is renowned wizard (and true star) Todd Rundgren covering it for the fourth installment in the Swindles series. Rundgren takes the song down a electropop wormhole, transforming the tune into something completely unique from the original recording. “Bang Bang” was produced and engineered by Rundgren and Swindles-curator Steve Mandel. The B-Side features an instrumental of the track.

GRAMMY-Award winning bluegrass outfit Steep Canyon Rangers brought a special surprise to attendees of their performance at Merlefest 2019. To honor their home state, the Rangers performed a selection of songs from the artists of North Carolina. Featuring unsung Carolinian heroes like Ola Belle Reed and Elizabeth Cotten to world-renowned performers like Thelonious Monk, Doc Watson, James Taylor and Ben E. King, the Rangers’ live North Carolina Songbook performance shows why the Tar Heel State continues to celebrate their legacy of musical excellence and influence that dates back over a century. The LP arrives on North Carolina Flag Tri-Color Vinyl.