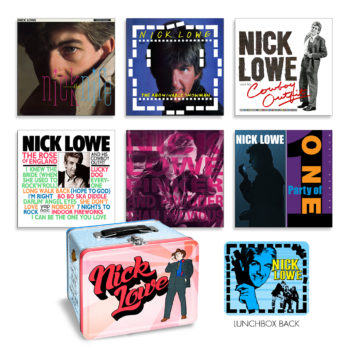 All six albums will be released digitally for the first time ever on July 14, with CD and vinyl reissues for the first two titles Nick the Knife and The Abominable Showman arriving on that date as well.  CD/vinyl reissues for Nick Lowe and His Cowboy Outfit and The Rose of England will be released on August 25, followed by Pinker and Prouder Than Previous and Party of One on October 20.

Listen to Lowe’s never-heard recording of the country classic “Walk On By” from the …and His Cowboy Outfit sessions, via NPR Songs We Love.

Highlights and special guests abound on these six albums, with many enduring mainstays of Lowe’s live show such as “Raging Eyes,” “Half a Boy and Half a Man,” “All Men are Liars” and “What’s Shakin on the Hill” originating in this period.  Every member of Lowe’s former band Rockpile (Billy Bremner, Dave Edmunds and Terry Williams) and his future group Little Village (Ry Cooder, John Hiatt and Jim Keltner) collaborated with Lowe during this period, as did Elvis Costello, Huey Lewis, Paul Carrack, Carlene Carter and many others. With demos, outtakes, live recordings and alternate art added to these reissues, as well as exclusive merchandise available through Yep Roc’s online store (including the lunch box pictured above), the label shines a fascinating light on a chapter of Lowe’s career that is ripe for rediscovery.

In other news, Nick Lowe will be honored with the Independent Icon Award at this year’s A2IM Libera Awards on June 8 in NYC.  He’ll mark the occasion with a short run of area solo shows, including three already-sold-out nights at City Winery New York on June 9, 10 and 11.  See below for a full run of dates.

THE ABOMINABLE SHOWMAN TRACKLIST:
We Want Action
Raging Eyes
Cool Reaction
Time Wounds All Heels
Man of a Fool
Tanque-Rae
Wish You Were Here
Chicken and Feathers
Paid the Price
Mess Around with Love
Saint Beneath the Paint
How You Talk To an Angel
(What’s So Funny ‘Bout) Peace, Love and Understanding? (Live) (Bonus Track)
Cracking Up (Live) (Bonus Track)

NICK LOWE AND HIS COWBOY OUTFIT TRACKLIST:
Half a Boy and Half a Man
Breakaway
You’ll Never Get Me Up (in One of Those)
Love Like a Glove
The Gee and the Rick and the Three Card Trick
(Hey Big Mouth) Stand Up and Say That
Awesome
God’s Gift to Women
Maureen
L.A.F.S.
Live Fast, Love Hard, Die Young
Honky Tonk Hardwood Floor (Bonus Track)
Walk On By (Bonus Track)

THE ROSE OF ENGLAND TRACKLIST:
Darlin’ Angel Eyes
She Don’t Love Nobody
7 Nights to Rock
Long Walk Back
The Rose of England
Lucky Dog
I Knew The Bride (When She Used to Rock and Roll)
Indoor Fireworks
(Hope to God) I’m Right
I Can Be the One You Love
Everyone
Bo Bo Ska Diddle

Tags: nick lowe, Nick Lowe and His Cowboy Outfit, Nick the Knife, The Rose of England