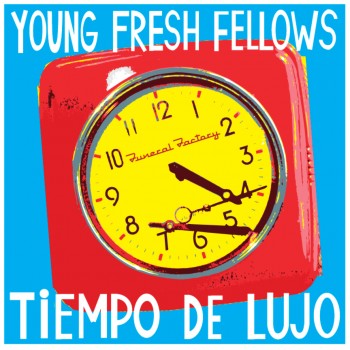 “This record is one of the most collaborative we’ve ever made,” says Scott McCaughey. “We learned the songs on the spot, if we’d written them already. If we hadn’t written them we just played them without learning them. That saved time, and therefore money. Tiempo y dinero, amigos. The Golden Rule. We never even stopped to get beer. Or burritos. I think we had a cup of tea once. Or a seltzer water with a hint of lemon. Rick Buckler of the Jam came by to return a blazer, but otherwise we forged ahead pretty much uninterrupted.”

The songs for Tiempo De Lujo were recorded in a twelve-hour session the long-time band members “booked” in order to have an excuse to get together. What resulted was a surprisingly cohesive grouping of twelve songs — hmm, that’s one per hour… seems like it shouldn’t have taken that long — seasoned bountifully with the energy and lyricism that YFF fans have come to expect.  “Tad’s Pad” explores the inner sanctum of a drummer’s mind. “Cleflo & Zizmor” cuts deep into a sordid world of self-help surgery. “Margaret” is all about Margaret – or IS it? “Death Of An Embalmer” and “(Life Is A) Funeral Factory” form a celebratory welcome to Side Two.

In between performing and recording with a multitude of other combos, the Young Fresh Fellows have been recording rough-edged, witty garage pop since 1981 or 1984 depending on which calendar is used. The Fellows are Jim Sangster – bass; Kurt Bloch – guitar; Scott McCaughey – guitar; Tad Hutchison – drums.  If there are four microphones available, each Fellow will use one, with his voice.  Jim is the best screamer.  The occasional mellotron or bass harmonica is bound to turn up.  Don’t be afraid.

If you can’t say Tiempo De Lujo very well, feel free to call the album Land Of A Thousand Places.